Dude flies his quadcopter in a park. Other dude shoots it down

"Jackson County sheriff’s deputies arrested Grindstaff Wednesday, after the agency posted photos from Hidde’s footage that prompted Grindstaff to turn himself in. He was booked in the Jackson County Jail Wednesday and released Thursday on his own recognizance, jail records show.
Similar sentiments in support of the alleged shooter were posted at the private Jackson County Scanner Group Facebook page consisting of about 41,000 members. One post cited in a previous media report about the story alleged Hidde was 'being a peeping Tom creeper.' Hidde said he read about 90 percent of such comments.
Hidde denied any sort of harassing behavior at the park. He saw Grindstaff, another truck driving off-road, a dirt bike rider, a woman riding her horse and another walking her dog. He said he was scoping out the park watching for high-action subjects."


Posted by Jeff Jacobsen at 7:55 PM No comments:

"As you should know, it is illegal to use DRONES in the National Park. Certain National Parks have been authorized and trained to use them. One is Grand Canyon National Park. We were fortunate to have their drone team come and assist in the search for the missing couple. The GCNP drone operators gave me permission to show a very small segment of what they see when operating over the Maze area. As you can see, it is not as easy to see detail in the rocks. Also, people tend to wear clothes that blend, instead of bright colors."
Posted by Jeff Jacobsen at 1:39 PM No comments: 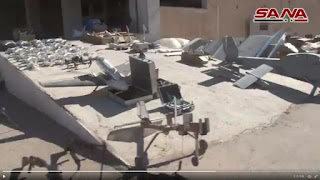 
Shocking amount of #ISIS heavy weapons captured by SAA in Mayadeen, Deirezzor. Arms caches like this can only be provided by states. #Syria pic.twitter.com/1INH6CCtGx
— Sharmine Narwani (@snarwani) October 19, 2017

Posted by Jeff Jacobsen at 9:02 PM No comments:


"A drone crashed into a passenger plane last week in Canada, renewing safety concerns about unmanned aircraft and raising questions about how best to enforce regulations now that drones are becoming more and more commonplace.
The drone hit a plane carrying six passengers and two crew members en route to an airport in Quebec on Thursday.
'This should not have happened,' Canada’s minister of transport, Marc Garneau, said at a news conference on Sunday. 'That drone should not have been there.'
Nobody was hurt, but the incident could have caused 'catastrophic' damage had it hit an engine or incapacitated the pilot, Mr. Garneau said.
Researchers at Virginia Tech’s College of Engineering demonstrated in 2015 that an eight-pound quadcopter drone could rip apart a nine-foot-diameter engine in less than 1/200th of a second."

Too high and too close to an airport. Another idiot.
Posted by Jeff Jacobsen at 10:59 AM No comments:


Posted by Jeff Jacobsen at 8:34 PM No comments:

Don't fly in these areas in the US

"Here are the landmarks at issue.
The FAA has also issued similar guidelines around US military bases, and it has already barred drone flying with National Parks, where some of these monuments are located. The FAA said it was 'considering additional requests' from other federal agencies about barring drones flying near other locations."

I would like to try to fly up Lincoln's nose, but alas...

Posted by Jeff Jacobsen at 8:11 PM No comments: