"The Mine Kafon Drone flies over dangerous areas to map, detect and detonate landmines from a safe distance. The drone works autonomously equipped with three separate interchangeable robotic extensions.
These three methodologies combined makes the MKD up to 20 times faster than traditional demining technologies. As well as being safer, it also up to 200 times cheaper."

Posted by Jeff Jacobsen at 8:30 PM No comments:

No Drone Zone at Republican convention 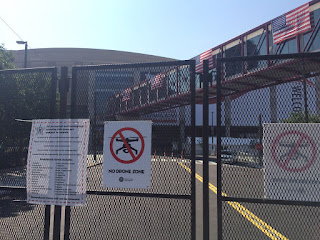 Posted by Jeff Jacobsen at 9:51 AM No comments:

"On Friday afternoon police officers arrested Eric Wamser, 57, of Foresthill, California. He’s being charged with interfering with firefighting operations. Wamser was allegedly taking aerial footage of the fire with his drone, though the model he was using has not been released. Police claim that Wamser posted some of the footage on social media, which helped lead to his arrest.
As the Wall Street Journal notes, there have been over a dozen hobby drones spotted near wildfires so far this year. And according to the U. S. Forest Service, firefighting aircraft in the United States have had to be grounded six times due to hobby drones interfering with their operations in 2016."

It's probably going to take a few such arrests before the gravity of such sinks in to the idiots who won't listen otherwise.

Posted by Jeff Jacobsen at 8:00 AM No comments:

"An additional $20 million are needed to deal with Islamic State’s reconnaissance and bomber drones, the US Defense Department has told Congress. The money will be spent in addition to the $190 million already allocated to countering terrorist networks.
The money is expected to be given to the Joint Improvised-Threat Defeat Organization (JIDO), the Pentagon’s special office dealing with improvised explosive devices, Defense News reports.
By the end of 2016, the JIDO with a budget to deal with new IED threats that emerged during the campaigns in Afghanistan and Iraq, will become a permanent establishment under the Defense Threat Reduction Agency."

This is indeed a threat.  But it's the usual defense vs. offense escalation that comes with any new device.

Posted by Jeff Jacobsen at 6:32 AM No comments:

Should robots be used to kill people?

"Fearing additional casualties, the officers deployed a small, remote-controlled robot to carry an explosive device near shooter Micah Xavier Johnson, 25, which they then detonated, killing him.
'We saw no other option but to use our bomb robot and place a device on its extension for it to detonate where the suspect was,' Police Chief David Brown said at a news conference Friday morning.' Other options would have exposed our officers to grave danger .… We have confirmed that he's been deceased because of the detonation of the bomb.'"

They could have used a quadcopter in certain circumstances.  Is this acceptable?  More things to think about.   In a way, delivering a piece of lead very fast, or a small bomb much more slowly are not that different.

Posted by Jeff Jacobsen at 5:09 PM No comments:

Be forewarned of pesky drones

"Of course, not just rich people want to protect themselves against drones. Lee Jones, a Dedrone manager, explains that the German startup wants to sell to jails, prisons, embassies, police stations, military facilities, data centers, and even sports arenas.
Earlier this year, the company announced a deal with the New York Mets baseball team to install 11 trackers along the outside of Citi Field in Queens. The company also has a deal with the Suffolk County Prison to help to keep out unwanted contraband. For now, DroneTracker's capabilities are detection-only."

Ok, so you know there are drones around.  then what?

Posted by Jeff Jacobsen at 7:13 AM No comments: